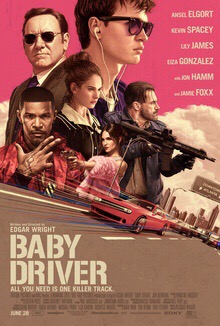 Baby Driver,A fun crazy ride.Driven by a eccentric teenager,played by ansel Elgort who was part of the movie “Fault in our stars.” But as he falls in love with Debora played by Lily games who stared in Cinderella. He wants to change his track in life,But one more assignment from boss played by Kevin Spacey,For his lucky charm.Makes him take the decision of taking the assignment.But…The movie written and directed by Edgar Wright who’s last  movies you could recall as “Ant man “and “The adventures of TinTin:”Secret of the unicorn. ”

The movie had a feel of the 90s with cassets and recorders being used by Baby including today’s tech like the iPod,The loots too were keeping in mind today’s times and planning them out.

Action.Speed.Music. Was what made this an enjoyable watch. Giving you a thrilling ride,In a comfortable seat.