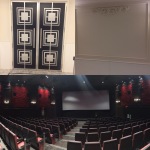 JIA ZHANGKE one of the Best Chinese Filmmaker,But one of the best filmmakers in the world too.Had not only his film screened at the festival,But also was present himself during the festival for a Q&A on his Films and his filmmaking journey.Two of his movies were screened during the week the festival was held “A Touch of Sin”(THAIN ZHU DING) and “Unknown Pleasures “(RÈN XIÃO YÁO) Two of his most popular work he is known for in his recent past.

I Managed to catch “A Touch of Sin” A story about 4 people, from 4 different provinces.An economic giant slowly eroded by giant,An angry miner revolting against the corruption of his village leaders,A migrant worker at home for NewYear discovers the infinite possibilities a firearm can offer.

A pretty receptionist is pushed to her limits when a rich client assaults her. And a young factory worker goes from one job to another to improve his lot in life.

The film Had the Story,Screenplay and Direction done by JIA ZHANGKE. Still Life(2006) won the director The Golden Lion award (Best Film)at the 63rd Venice International Film festival.Still Life tells the story of two people in search of their spouses.

“A Touch of Sin” has been my 1st Chinese film screening and it only mirrored the Chinese Autocratic,Communal culture while the story was being told.A Touch of sin would have been a moment of realisation,Had I missed the opportunity of not watching the film.

Its difficult for me to comment on the directors style and other technical aspects for JIA Zhangke since this was the 1st film of mine of his which I viewed.

DREN ZHERKA a Debut director from Kosovo had his film ECHO(EHO) screened and witnessed by cinema buffs.

A story about A senior citizen woman involved in a car accident that results in the death of the victim Luan,Overcome by her Guilt she tries finding his family.The search leads her to ismet a 70 + father of laun.As days passes ismet tries to come in terms with the shocking news about his son and recalls the last moments spent with his son .Hanna the Senior Citizen woman has lost her husband and has not heard from her son,can easily understand the loss of ismet
The film that has a parallel storytelling sharing both the thoughts and struggle of both the characters is more story driven rather than dialouge driven.A serious movie to begin your day with,But also a story about two grandparents who have lost somebody and are finding it difficult to live with the fact of what they have lost.
JÉRÓME REYBAUD who’s film 4 Days in France was acknowledged as the Critics Choice at Venice International Film Critics 2016 was screened too. JÉRÓME 1st feature film to have Have not only being Directed,But the story and screenplay has been done by him

4 Days in France is about Pierre Tomas,Who leaves to travel through france.And as he is wandering around to find his lover Paul , he tries to find him through an app (Grindr)These two lovers try in their own ways,to find their way back to each other.

The film is an interesting take on how much these two struggle to find each other and how they finally meet each other.

This will be 3 Series Blog,Follow me to stay updated which are the remaining 7 movies I watched.