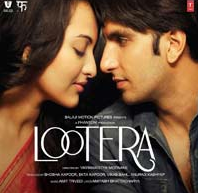 Lootera,the movie was beautiful which was adapting to the time of the 50s,

The location where the movie was shot was good, the way the characters acted , expressions , the actors were also great , especially sonakshi sinha who has taken a step further by avoiding doing another masala movie and attempting an artistic movie .The movie tends to be a little slow to show the details

The director Vikramaditya motwane ,has really researched well to get the things right.

He has also done something different from his first udaan ,a movie about how a guy has to live, where is father i’snt too concerned about him and then attempting a first love story and this might just do better in the international festivals.

The music was also slow, soft just to fit in the environment of the 50s

Overall it’s a movie ,where you would  appreciate everything or nothing .